The latter is a real passion. And, thanks to that passion — and he and his wife, Grace, moved to the city of vision a few years ago — Rio Rancho has a community theater troupe.

Undeterred, albeit slowed down by the pandemic, Sussman is proud to talk about the first of three Rio Rancho community player shows this season: “A Little Piece of Heaven.” He can’t divulge the titles of the other two shows, but says they will “hit the boards” next October and April.

Living in Avix Art at 4311 Sara Road, Sussman has seen the group grow from a dozen people at its inaugural meeting in September 2019 to 32 people at the next meeting two weeks later – and now at 60 people.

“I’ve been directing community theater for almost 45 years now,” he said. “Until my wife and I moved here to Rio Rancho, all of my accomplishments were back east — I’m a Philadelphia kid.”

Sussman, 72, majored in journalism and minored in theater arts while attending Temple University in Philadelphia, where he hoped to play college tennis.

The Owls’ tennis coach, after watching him play, suggested that he “might be better off covering the sport than playing the sport at this level,” Sussman recalled.

He stayed with the team but didn’t step onto the pitch, so he took that advice.

“I made a lot of accomplishments at the high school level and in the community,” he said when that tennis dream was over. “I sort of lost my way from tennis, but a bit by mistake I found my way to acting.”

“I first fell in love with theater when my grandmother took me downtown to the Fox Theater to see ‘The King and I,'” he recalled.

Years later, he and his wife saw this show on Broadway, one of Yul Brynner’s last performances before his death from cancer. He also directed “The King and I”, as well as other familiar shows, such as “Fiddler on the Roof” and “Arsenic and Old Lace”.

He decided to quit the high school gig, wanting to return to the city of brotherly love, “and got the opportunity to teach in a communications program there and went on to direct high school theater in Philadelphia. , as well as starting to lead community theater.”

When another opportunity presented itself, Sussman became an administrator and eventually middle school principal.

“One of the education research companies saw me presenting one day and said, ‘We could use someone like you,'” he recalls.

The rep gave him a business card, which he pretty much ignored.

“A year later, I was back at the same presentation venue, giving another presentation, and the president of the company walked up to me and said, ‘What happened? past ? said Sussman.

He hadn’t realized that the company took seriously his ability, which teaches administrators “to understand the fundamentals of balanced leadership within a school and a district.”

He tried this job, and it worked better than he could have expected.

He said he spent from 2008 to around 2018 traveling the world from Saipan to Canada and the United States “until my wife, Gracie, the love of my life, said, ‘You know, Honey, it’s time to get off the plane. ”

In his mid-60s, Sussman retired. He and Grace moved to Rio Rancho to be close to family members, including two children in Albuquerque.

“My broad decided Rio Rancho was going to be the place,” Sussman said.

He discovered that no community theater groups existed in the city of vision, although there were a handful in Albuquerque.

“I was looking for something to connect with,” he said. “I had never done a startup…from the ground floor to creating a community group.”

Sussman began printing flyers, “dropping them here and there,” putting information on NextDoor and Facebook, and scheduling a meeting for September 2019.

Rio Rancho Community Players are hosting rehearsals and performances at Avix Art, but Sussman is looking for a bigger venue.

“COVID has stopped us three times,” he said.

Nonetheless, the band’s production of “Our Town” sold out for eight performances over a three-weekend run. Next month’s “A Little Piece of Heaven” will have nine performances.

“What I would like to do is create a youth component, he says, where the plays are designed for young people. And then we bring in a whole new group of customers to come watch the kids play.

If you would like to join the community players as a player or behind the scenes, contact Sussman at mjsussman@gmail.com. 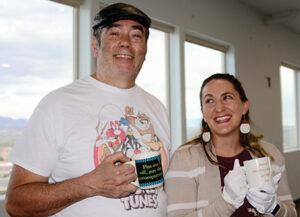 Angels Steve Weitz (Henry) and Jeannie Hawks (Elizabeth) say “A Little Piece of Heaven” is a very fun piece and they’re happy to be in it. (Gary Herron / Observer)

Grab your own “little slice of heaven” soon

On show days, tickets go on sale at the theater one hour before the show.